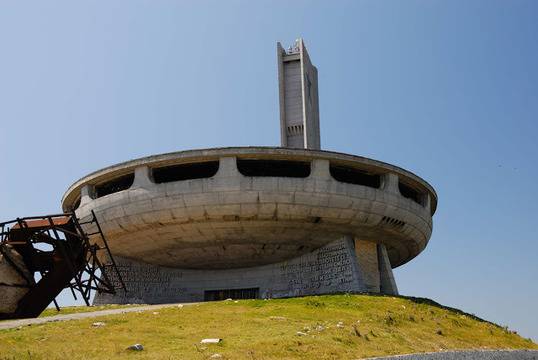 Wow. Stunning. Check this out: http://www.flickr.com/photos/mastababa/2638838968/in/set-72157594477637452/ (Not my photos, my camera was broken when I was there, alas.) That monument is in Varna, on the Black Sea coast of Bulgaria. Very much in the same style and of the same era as the flying saucer. Officially, the Varna Liberation Monument (search Flickr for that phrase for more images) was built to commemorate the liberation of Bulgaria from the Ottomans by Russian forces in 1877 (someone should fact-check that). Unofficially, it served to remind the Bulgarians who was really in charge of their country in the 1970s: the USSR. The Varna monument, like the flying saucer, is totally trashed inside, there is evidence of serious partying. It contains big meeting rooms, bathrooms, a kitchen, it's huge, and was surely magnificent in its brief heyday. Who knows if it was ever actually used, these kinds of communist buildings are almost totally ceremonial, not functional.

It was once one of the most famous monuments dedicated to communism. But after the end of communism era in Bulgaria this monument has been abandoned. Let’s take a look inside.

The President of the American University in Bulgaria answers questions from the readers of Eurochicago.com

On November 21, 2009 in the hall by the Bulgarian Orthodox Church „Saint John of Rila“ there was held a meeting of the Bulgarian community in Chicago with the President of the American University in Bulgaria, Dr. David Huwiler. On our pages we have already reported the event – link (in...

Coolest I Am Flying To The Moon

roller in front of the old communist monument

Church of the Flying Spaghetti Monster

In FSM news — Nebraska prisoner Stephen Cavanaugh is suing over the right to pursue his faith in the Flying Spaghetti Monster.

* to dress in religious garments — that is, full pirate regalia — and,

* to take part in weekly meetings with others who...

PowerEgg - The Flying Robot by PowerVision

To view this video please enable JavaScript, and consider upgrading to a web browser that supports HTML5 video PowerEgg - The Flying Robot by PowerVision

PowerEgg, the next generation drone, will be officially launched and coming to stores...