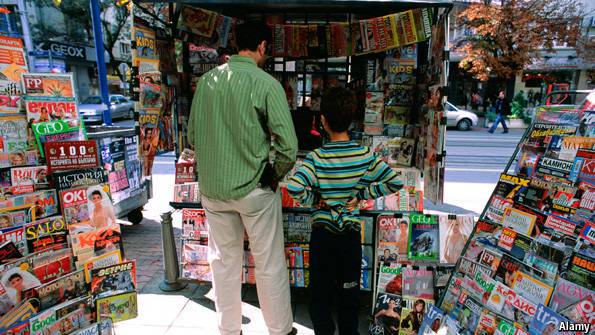 ONE of the most discussed issues in Bulgarian media is the topic of the deteriorating media freedom in the country. Consistently ranking last among European Union members the country keeps regressing. Bulgaria now ranks 87th in Reporters Without Borders’ latest annual Press Freedom Index, down from 35th in 2006.

“There is a growing concern that most of the media have retreated from their main function, to inform the public on relevant topics,” says Nelly Ognyanova, a Bulgarian media law expert. “The media is often serving political parties and various economic groups.”

Several calls from abroad underline Ms Ognyanova’s assessment: the American Department of State counts the “gravely damaged media pluralism” in the country as one of its most pressing human rights problems; the European commissioner for digital agenda, Neelie Kroes, wrote a letter to the then prime minister Boyko Borisov urging him to protect independent media. Matthias Höpfner, the German...
Прочети цялата публикация

"Detskata kashta" ("Children's House") is a half-day and full-day childcare center in city of Varna. It is a private institution for children from 2 to 5 years. It is located on a quiet...

AK47 Made in Bulgaria

The Bulgarian laws allows the adoption of Bulgarian children by foreign families and individuals. Bulgaria hav accepted the requirements of Hague Adoption Convention to regulate the procedure. The process is sensitive and can take considerable amount of time, as usual, between two to...

When it comes to defending your rights as a natural person or securing your business plan and actions as a legal person, you usually need legal advice and representation from a lawyer Bulgaria. They will provide you with legal advice on various issues and questions and will help you and your...

Litigation in Bulgaria is the typical method for resolving different issues and disputes. Usually litigation in Bulgaria can be resolved with out-of-court settlements but if there is no agreement between both parties the dispute will be heard in front of a judge. When a dispute has to be...

The Bulgarian government is reducing the threshold of investment that a foreigner has to make in real estate in order to obtain permanent residence in Bulgaria. The currently required investment is 600,000...