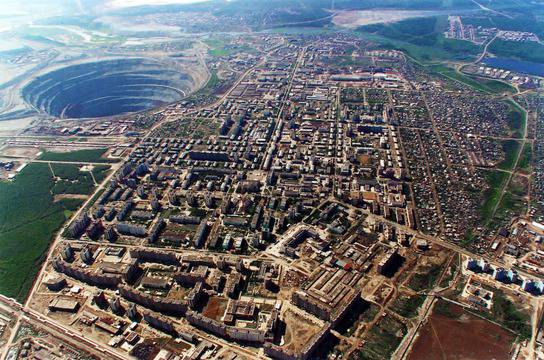 The second-largest man-made hole in the world (surpassed only by the Bingham Copper Mine in Utah) is a diamond mine located on the outskirts of Mirny, a small town in eastern Siberia. Begun in 1955, the pit is now 1,722 feet deep and 0.78 miles in diameter. Stalin initially ordered construction of the mine to satisfy the Soviet Union's need for industrial-grade diamonds.

The harsh, frozen Siberian landscape made working on the mine a difficult proposition at best. Jet engines were turned on the unyielding permafrost in order to melt it; when that failed, explosives were used. During its peak years of operation, the Mirny mine produced over 10 million carats of diamonds annually, a good percentage of which were gem-quality.

eToro (Europe) Ltd., a Financial Services Company authorized and regulated by the Cyprus Securities Exchange Commission (CySEC) under the license #109/10

Past performance is not an indication of future results

Contracts For Difference are leveraged products. Trading in...

Welcome to VegWeb.com | The World's Largest Collection of Vegetarian Recipes

Meet Miraah - One of the World's Largest Solar Plants

To view this video please enable JavaScript, and consider upgrading to a web browser that supports HTML5 video Meet Miraah - One of the World's Largest Solar Plants

We have broken ground on one of the world's largest solar plants of any...

Hire outbounders from around the world

What is Outbounders and how can it help me?