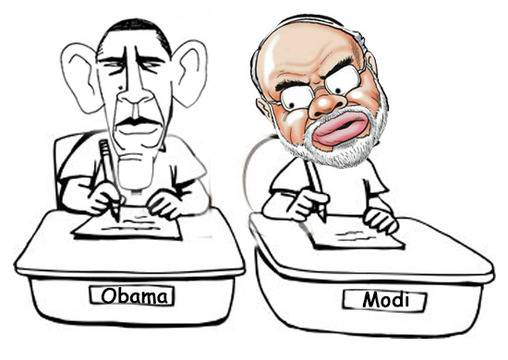 Copying is worse form of appreciation and modi doesn’t feel anything wrong with this, At the BJP headquarters, they appear to be taking not just one leaf but the entire thesis from the Obama Campaign Material from the 2012 Obama re-election that had aimed to motivate participation of the young and the undecided using the role of storytelling and emotion to entice and move Indian youth exactly like Obama.

As modi blatantly chants Obama’s ‘Yes, we can!’ the world asks him, why copy? Why not be Original, Well to be original one need to be mentally and intellectually sound and we all know narcissist modi.

Plagiarism, clone, counterfeit, fake, forge, imitate, knock off, plagiarize few words that comes to mind when i see Modi’s campaign, After global media hawks spotted the uncanny similarities in Obama’s and modi’s speeches, they got up from their chair and pointed fingers at modi’s direction for cloning, For every ones reference I’m adding the main piece of the...
Прочети цялата публикация

God chose me, bless me : Modi