2 seconds rule on the road for safe following distance 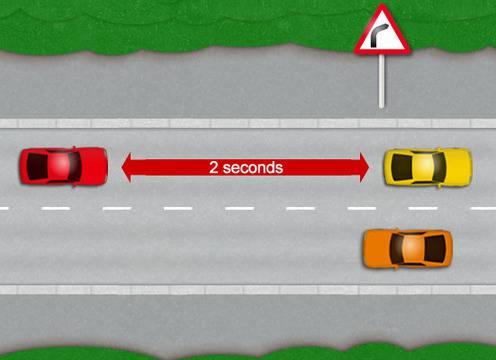 Do you know the 2 seconds rule for defining the safety distance on the road?

The two-second rule (also known as the three-second rule in some countries) is a rule of thumb by which a driver may maintain a safe following distance at any speed. The rule is that a driver should ideally stay at least two seconds behind any vehicle that is directly in front of the driver’s vehicle. It is intended for automobiles, although its general principle applies to other types of vehicles.

To estimate the minimum and safe following distance, allow the car in front (the green car) to pass a fixed object (dashed line in the video).

This fixed object can be any object that is easy to distinguish such as a road marking, a road sign, etc.. As the rear of the car in front roughly lines up with your chosen reference marker, count to 2 seconds. If before you have reached two seconds your vehicle has passed the same reference marker, you will need to increase your following distance and...
Прочети цялата публикация

On the road … again

Biker on The Road

Different typefaces on the road

Road signs in Italy use a variation of the Transport typeface called Alfabeto normale, or the condensed form of it, called ‘Alfabeto stretto’ (the latter is the one on the top and the bottom signs in the photo).

Albania use the ‘Alfabeto normale’ typeface (with...

MamkaMu :: On the Road Again

on the road / На път

The Home on the road blog.

Homes are bar none probably the most satisfying place to be in the world, a place where all the stresses and problems seem to leak away.

There are those select few though, whose homes are not a fix place but rather a constant refreshing update to different locations. There are many ways...