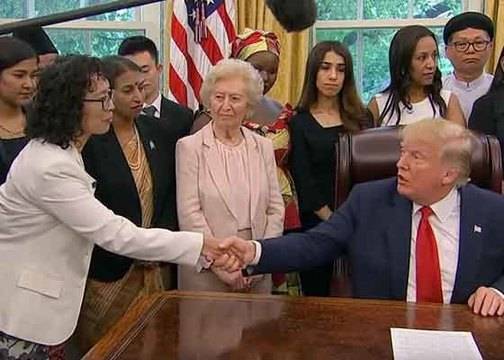 (Minghui.org) Ms. Zhang Yuhua was among the 27 survivors of religious persecution from 17 countries, who met with President Donald Trump in the Oval Office in the White House on July 17, 2019.

The 27 survivors were in town to attend the second Ministerial to Advance Religious Freedom this week, which was held in the U.S. Department of State in Washington D.C. July 16-18, 2019.

This is the first time that President Trump officially met with a Falun Gong practitioner at the White House since he took office in 2017.

Ms. Zhang, 59, told President Trump about the persecution of her husband Mr. Ma Zhenyu, who is currently serving a three-year term at Suzhou Prison in Jiangsu Province.

Mr. Ma, 56, was arrested in September 2017 and sentenced to prison in June 2018 for “writing seven letters to central government leaders to appeal for Falun Gong” as stated by the verdict.

Practitioners of the spiritual discipline Falun Gong marched through the streets of London and Cambridge on Saturday 22 and Sunday 23 July, appealing for an end to the 18-years of persecution instigated by the Chinese communist regime.

A colourful marching band was followed by...

NEW YORK—Striking traditional costumes, colorful banners bearing messages of hope, and resonant melodies performed by a 500-strong marching band—these were the highlights of a parade held in...

President Donald Trump Inauguration Speech - "We will be protected by...

(Minghui.org) A practitioner living in Sarnath, who has introduced Falun Dafa, also known as Falun Gong, in Sikkim, Ladakh, and other remote places in India, recently ventured into some of the most remote and inaccessible areas in Northeast India.

The President of the American University in Bulgaria answers questions from the readers of Eurochicago.com

On November 21, 2009 in the hall by the Bulgarian Orthodox Church „Saint John of Rila“ there was held a meeting of the Bulgarian community in Chicago with the President of the American University in Bulgaria, Dr. David Huwiler. On our pages we have already reported the event – link (in...

Looking for a simple man that is ready to enjoy friendship and/or sexually pleasures with no strings attached but we are a...