THE KYSHTYM BEING: DWARF, ALIEN OR WHAT WAS THAT CREATURE? - Aliens | БГ Топ 100 класация на сайтове 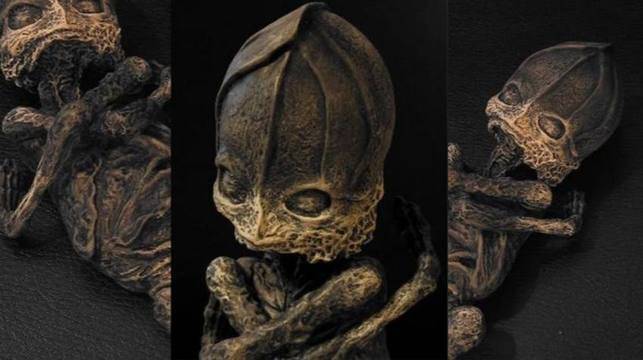 Alyoshenka (diminutive of the Russian male first name Alexey) or the Kyshtym Dwarf – anthropomorphic artifact, representing unidentified mummified remains of biological origin, found in 1996 near the southern outskirts of Kyshtym in the village of Kaolinovy, Chelyabinsk region of Russia.

A strange “creature” was discovered in May 1996 in the village of Kaolinovoe near Kyshtym by a pensioner Tamara Vasilyevna Prosvirina, suffering from mental illness. A lonely pensioner received a “telepathic order”: get up and immediately go to the cemetery.

However, the pensioner was often at the cemetery because of a mental illness, gathered flowers there and even brought photos of the dead taken from the monuments to the house.

Tamara Vasilievna was, in general, calm, did not offend anyone, and only occasionally in times of crisis turned out to be in a psychiatric hospital. So, the fact that she was not scared by the dark night of “strolling” in the cemetery is not...
Прочети цялата публикация

Antonio Villas Boas, 23, from Brazil, reports he was abducted on October 15, 1957 which would become one of the best documented case of an alien abduction. He was first reluctant to tell his story but was convinced by Dr. Olavo T. Fontes, a professor of Medicine at the National School of...

Описание на сайта: Signs of alien abduction. Many people from around the world claim that they have been abducted by aliens. They claim that they saw creatures with a big head and big wobbly eyes performing operations and experiments on them in their spacecraft. We dug up to the core and...

Many people from around the world claim to be abducted by the alien beings in a spacecraft. Here are the top 5 true alien abduction cases brought to you by the infinity explorers team.

Описание на сайта: Typical reptilians are described as 180-240 centimeters tall, two-legged creatures that have scaly, green skin, emit an unpleasant odor, they have large eyes, usually yellow or golden. Sometimes they are associated with the myths of ancient astronauts who allegedly came to...

Various types of biped reptoids have been reported. There are Amerindian legends about Lizard People who live underground.

According to Hopi legend, Mount Shasta, California is home to these creatures. There’s a debate as to whether reptilians belong in the realm of cryptozoology, UFO...