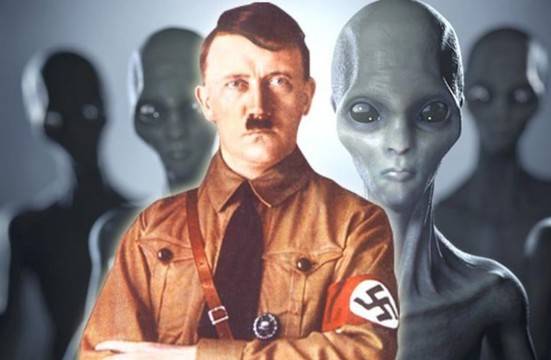 The Fuhrer asserted that a blond race of Aryan super-human warriors inspired his views on genocide and hatred. These super-humans also provided the much needed advanced technology that Germany used during WWII.

When Hitler first stepped onto the world stage with his contrived rhetoric, he was re-writing German mythology and history into a form of propaganda designed to increase German self-worth after Germany’s WWI defeat. Most people thought he was insane and did not take him seriously at first.

However Hitler announced that he was a member of a UFO cult and had an exclusive line of communication with a powerful extraterrestrial group. According to Hitler, these extraterrestrials were the source and power behind his new-found, born-again German ideology.

He explained that Nazi mysticism was the product of their devotion and worship of the Manipulative Extraterrestrials. Many high ranking Nazi members of Hitler’s inner circle declared that they also...
Прочети цялата публикация

For decades, a rich mythology has developed around the claim that Nazi Germany’s engineers secretly developed one or more super-sophisticated saucer-shaped aircraft and unmanned disc-like missiles.

Tat this technology was appropriated by the US or the Soviet Union in the post-war...

Multi-billion dollar tech giant Google has the most visited website in the world. One of its most popular products is Google Maps, which handles nearly billion mapping requests every week.

Thanks to its detailed satellite imagery and street-view service, from the comfort of your own...

As far as conspiracy theories go, David Icke has certainly made a name for himself. Operating in the name of exposing the reality about “who and what is really controlling the world”, Icke has written sixteen extremely long books, given multitudinous lectures and seminars, and appeared on many...

An underground Military Base/Laboratory in Dulce, New Mexico connects with the underground network of tunnels which honeycombs our planet, and the lower levels of this base are allegedly under the control of Inner Earth beings or Aliens. This base is connected to Los Alamos research facilities...