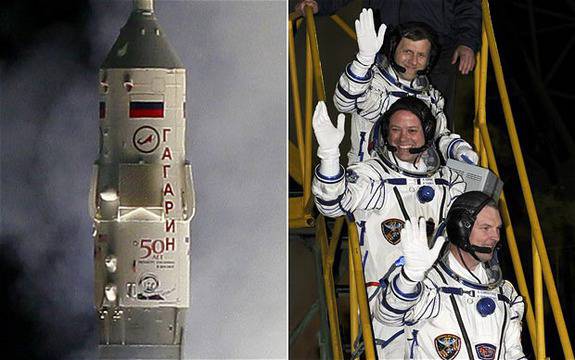 "They're feeling very good. They're very happy," said NASA astronaut Nicole Stott, who watched the launch from the viewing platform. Stott has been on two space flights, including the final mission of Space Shuttle Discovery, which landed March 9.

Live footage on NASA TV showed that a small stuffed dog hanging in front of the crew had begun to float, an indication of the weightlessness of space. The toy dog had been given to the Russian commander, Alexander Samokutyayev, by his daughter.

"It was perfect, quite appropriate for the anniversary," he said.

The launch from Russia's cosmodrome in Kazakhstan was the first for Samokutyayev and Andrei Borisenko.

Alexei Vanyashin is an Russian type designer. He studied typography at Stroganov University under Dmitry Kirsanov from 2002 until 2003. Vanyashin graduated in graphic design from the Institute of Design...

Russian looks death in the face: He jumps alight from a building (video)

Russian looks death in the face: He jumps alight from a building (video)

LiveLeak.com - Man saws his own penis off in front of employ.mp4

To view this video please enable JavaScript, and consider upgrading to a web browser that supports HTML5 video LiveLeak.com - Man saws his own penis off in front of employ.mp4 Сподели видео × ...

Motorola back in Action with a positive reaction

In the world of android , as the falling price of element exceed the speed requirements of the software mechanized by those parts, such commoditization has created a domination of capable and cheap-price devices with Motorola at the lead. While the Moto X was originally sold at similar prices...