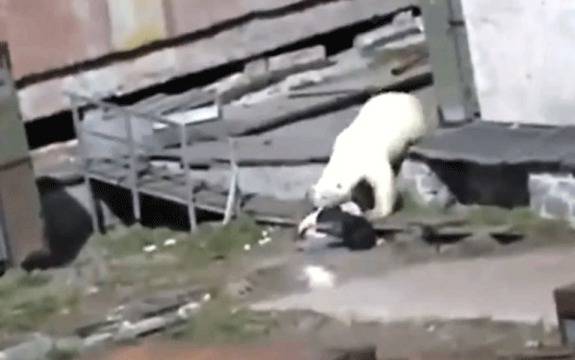 The attack was filmed on a camera phone and shows the woman cowering behind a low wall as the animal emerged from behind a building and lunged at her.

People watching the savaging screamed as it clawed and bit its victim.

In a move that may have saved her life, one witness threw a projectile at the animal, which retreated.

With her clothes in tatters, the woman stumbled to her feet and was surprisingly able to walk away from the attack.

It is not known what injuries she suffered in the ordeal.

The cub is in stable condition, according to staff at Penglai Ocean and Polar Region World, an aquarium in China's eastern Shandong Province.

Weighing just over half a kilogram the bottle-fed female is being kept in an incubator after suffering from problems with her digestive,...

The twins, who were born at the zoo in southern Germany on December 2, appeared carefree as they made their public bow in the spring sunshine.

The cubs outing comes soon after the unexpected death of Knut - the popular polar bear who rose to fame at Berlin Zoo.

To view this video please enable JavaScript, and consider upgrading to a web browser that supports HTML5 video Berlin: Woman kicked down stairs at metro station in random attack

Shocking footage has emerged of the moment a thug kicked a...