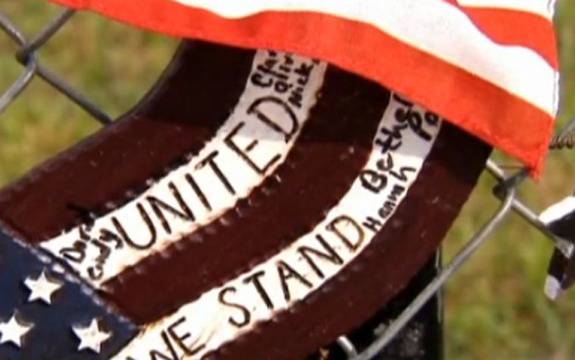 "This is where my brother is. This is where I choose to remember his last moments on this world. I can come here and pay my respects and talk to him, you know, tell him how proud, you know, that he's missed and that he's loved," Nacke said.

The 40 passengers and crew of United 93 were bound for San Francisco from Newark, New Jersey when the hijackers commandeered the aircraft over Ohio and the plane took up its new route toward the fateful crash east of Pittsburgh.

A recovered cockpit voice recorder captured the deadly struggle between hijackers and passengers.

Five minutes before the crash, Gordon Felt's brother, Edward, called 911 and reported a hijacking in progress.

"They made a plan. They prayed. They took a vote. They chose to act. They fought back.

"They breached the cockpit and fought for control of that flight and in doing so they lost their lives, but in the process they saved countless other lives and they perhaps saved the...
Прочети цялата публикация

September 11 anniversary: Video graphic of the attack on Manhattan

Ceremonies marking the 13th anniversary of the , 9/11 terror attacks for survivors and victims' families in New York and...

Remember, remember, the fifth of November...*

Remember, remember, the fifth of November…*

Remember, remember, the 5th of November*

Victims of Bullying at Greater Risk of Eating Disorders

Victims of Bullying at Greater Risk of Eating Disorders April 30, 2013 by Deanna in Clinical Articles Guest Blog post written by Jenny Hart Research suggests that one in six American children between third and twelfth grade are bullied; 500,000 took part in a survey conducted by the Olweus...