Baby gorilla on black market for $40,000 is rescued 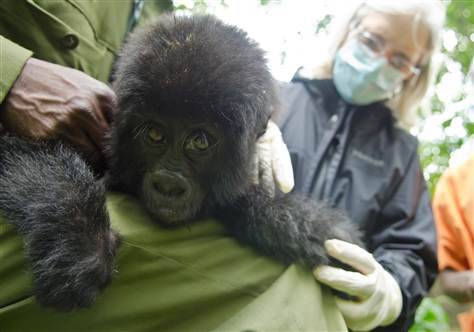 The black market for baby gorillas is growing, officials in the Democratic Republic of Congo said Tuesday, after a fourth incident this year led to the arrest of alleged poachers trying to sell one infant for $40,000.

This year marks "the highest number of baby gorillas confiscated from poachers in a single year on record," the Congolese Wildlife Authority said in a statement.

"We are very concerned about a growing market for baby gorillas that is feeding a dangerous trafficking activity in rebel controlled areas," said Emmanuel de Merode, warden of Congo's Virunga National Park. "We are powerless to control the international trade in baby gorillas, but our rangers are doing everything they can to stamp it out on the ground."

The park, Africa's oldest, is home to mountain gorillas, lowland gorillas, chimpanzees, elephants and buffalo. The park has also seen fighting inside its borders and nearby during an ongoing 12-year civil...
Прочети цялата публикация

gorilla on the building

To view this video please enable JavaScript, and consider upgrading to a web browser that supports HTML5 video gorilla on the building

gorilla on the building

The one and only .com of it's kind in the world...

The miniature primate is yet to been named as it is still too young for keepers to determine its gender.

The new arrival is cause for much...

Cruise disaster: crew member rescued after being trapped on board for 36 hours

Many of the missing are thought to be crew from Asian countries such as Indonesia, India, Bangladesh and the Philippines, who may not have understood instructions to abandon the ship.

"The gash in the hull is at the level of the machine room, which means that all the crew's cabins are...

Tonite is your nite baby time for papa love

To view this video please enable JavaScript, and consider upgrading to a web browser that supports HTML5 video Tonite is your nite baby time for papa love Сподели видео × ...