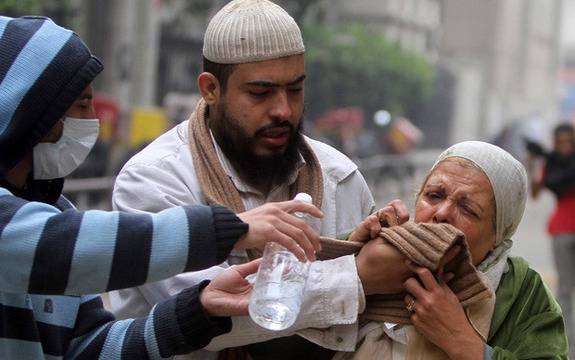 Rocks, shattered glass and trash covered most of Tahrir early Sunday. Several hundred protesters were camping out on the lawn of the square's traffic island. All roads leading to the square were blocked by protesters who ran ID checks on anyone coming into the plaza.

Sunday's clashes, which were mostly on a road leading from Tahrir to the Interior Ministry, appeared likely to grow.

Protesters were using social networking sites on the internet to call on Egyptians to join them, and there were reports of several demonstrations headed to the square, including one from Cairo University.

The military, which took over from Mubarak, has repeatedly pledged to hand over power to an elected government but it has yet to set a specific date. According to one timetable floated by the military, the handover will take place after presidential elections are held late next year or early in 2013. The protesters say this is too late and accuse the military of dragging its...
Прочети цялата публикация

Right-wing opposition lawmakers who oppose the bill have asked the Constitutional Council, France's highest court, to rule on whether the bill is constitutional.

Riot police used tear gas and stun grenades to disperse youths throwing stones and petrol bombs during a march through Athens held to protest against the Greek government's austerity measures. The clashes came during a 24-hour general strike that brought most public services to a...

Vatican police clash with gipsies on steps of basilica

Vatican police clashed with the Roma gipsies who had gathered at one of Rome's four papal basilicas on Saturday night in protest at efforts to stop dozens from the community participating in the Easter vigil.

Amid cries of "shame, shame" from local and foreign pilgrims, the gipsies...

Anti-government protesters at a rally in the Bulgarian capital Sofia have clashed with police outside the parliament building.

More than 2,000 people had been taking part in a peaceful rally when what the police described as...

"There were lots of missiles coming at us, bottles, bricks, petrol bombs, street furniture, too many to count and one hit Obi on the top of the head.

"He was lethargic and was bleeding from the left nostril which could be a sign of head trauma so he was taken to the vets and...