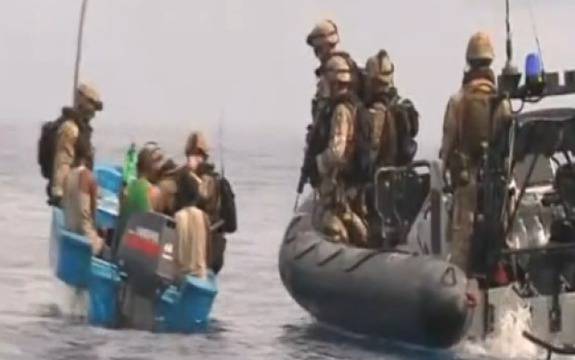 The MoD said the Royal Auxiliary Fleet Ship Fort Victoria which was carrying Royal Marines, performed the rescue between Somalia and the Seychelles on November 28.

The ministry said the ship had received information that pirate vessels had attacked a Spanish fishing boat north of their location and dispatched Fort Victoria's navy helicopter to investigate.

It said the Lynx helicopter identified a whaler and a skiff near the Spanish fishing vessel as suspicious and fired shots when the skiff sped away ignoring an order to stop.

The vessel was eventually halted and searched by marines. The Foreign Office said that a British-trained police dog team had gathered vital evidence that indicated the alleged pirates' vessel "may have contained traces of explosives or firearms."

The Seychelles government granted permission to bring the suspected pirates to the islands where they will face prosecution.

On Sunday, the second group of five Gripen fighter aircraft has landed at Sigonella air base in Sicily , where they expect to ...

Michele Zagaria, 53, considered to be the leader of the powerful and bloody Casalesi clan, has already been sentenced in absentia to multiple life terms in prison for a career of murder, extortion and drug trafficking.

The Casalesi clan, involved in drug trafficking and...

The centre, part of the Defence Growth Partnership, was opened in November last year and is dedicated...

To view this video please enable JavaScript, and consider upgrading to a web browser that supports HTML5 video Policeman is charged with rape after footage emerges showing a black youth being arrested by four of ...

The team found mortars, submarine depth charges, a string of 10lb bombs, bullets and a string of other ordnance, some dating back to the late 19th century, during the sweep.

"This beach is a mixture of sand, shingle, shells and, in places mud.

after… By DreamsHall | Published: 16 July 2009 photo: buche by little flair This entry was posted in арт and tagged жена, снимка, устни, фотография, фотоси. Bookmark the permalink. Both comments and...

This site is dedicated to the original copter game but also has many other helicopter games. There are also many...