Cruise disaster: crew member rescued after being trapped on board for 36 hours 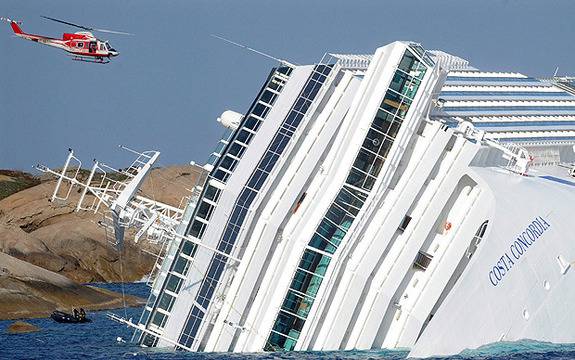 Many of the missing are thought to be crew from Asian countries such as Indonesia, India, Bangladesh and the Philippines, who may not have understood instructions to abandon the ship.

"The gash in the hull is at the level of the machine room, which means that all the crew's cabins are under water," said Sergio Ortelli, the mayor of Giglio, a tiny island which lies off the coast of Tuscany and is a popular summer holiday destination for Italians.

Ennio Aquilino, a fire service commander from Grosseto, said: "The ship has 12 levels and seven or eight are under water. It's like an immense cathedral, a labyrinth." Divers from the fire service and the Coast Guard were taking part in the search for survivors.

The cruise ship ran aground on Friday night when it smashed into rocks close to the shore of Giglio, at the start of a week-long Mediterranean cruise.

Workers are trying to save about 3,000 pigs in a pig farm, which was inundated by...

Baby gorilla on black market for $40,000 is rescued

The black market for baby gorillas is growing, officials in the Democratic Republic of Congo said Tuesday, after a fourth incident this year led to the arrest of alleged poachers trying to sell one infant for $40,000.

This year marks "the highest number of baby...

A Goat rescued after getting stuck on power lines in Greece

To view this video please enable JavaScript, and consider upgrading to a web browser that supports HTML5 video A Goat rescued after getting stuck on power lines in Greece Сподели видео × ...

Madonna receives backlash for being too old after nip-slip drama

Madonna has caused an outrage by purposefully exposing her right breast while performing in Istanbul over the weekend.

A flurry of fans have taken to the internet to criticise her actions and complain that the 53-year-old is too old to be flashing her flesh in such a way.

Products on board – Jewellery

Jewellery and clothing range on board

The collection features colourful and contemporary...