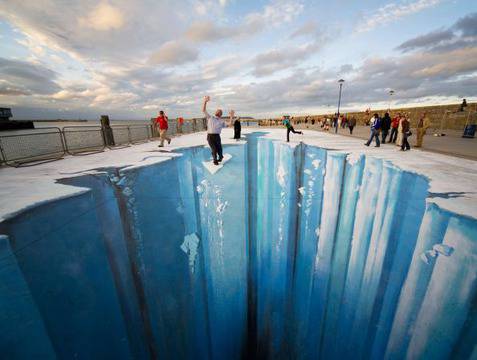 What started as a hobby for the now 43 year-old  German artist Edgar Müller, has led over the years to a really successful career. He has taken the art of pavement drawing to a whole new level with his breathtaking 3D landscapes and he is currently one of the few artists in the world who own the title of  ’Maestro Madonnari’ (Master Street Painter).

In November 2009 he achieved a new Guinness World Record for creating the world’s biggest anamorphic pavement art in Westfield London by covering an area of 330 square meters with an incredible piece of street art depicting a scene from Ice Age 3: Dawn of the Dinosaurs, for the film’s Blu-Ray and DVD launch.

Müller left his mark on the streets of countries such as: Germany, UK, Slovenia, Canada, Russia, U.S.A, Mexico. Here is a collection of some of his most famous works.

Which one is your favorite? Have you had the chance to see anything like this in person?